It has come to our attention that some players may view this website or our videos but never come forward and present themselves.  Even several of our current members admit that they were shy and hesitant before introducing themselves to us.  As the group leader, I really want to make it clear that we want you to come play Ballista!  Even if you’ve never played a single match or don’t have any level 60 gear, it doesn’t matter.  Take that first step, and I guarantee you’ll enjoy what we have to offer.

P.S. To those who may have quit FFXI or have lost interest in the grind, consider trying Ballista.  With us, Ballista is a completely separate game from FFXI.  The mechanics and strategies are totally different.  You can have a fresh start in a whole ‘new game’, and your hard earned gil and job levels give you a nice head start!

When we arrived on Lakshmi, it felt like diorama was won through careful planning and meticulous teamwork.  I still believe it did and it does, but what we faced when we got here..

END_OF_DOCUMENT_TOKEN_TO_BE_REPLACED

B) Uruz&co attack someone else.. we’ve had success with this and I’m not sure there’s much to say. Sharp mage kills are the key to victory with this style of game, not to mention a little luck with petra.

WHM-Kill strategy) We’ve seen them do it many times. Front line jobs attack WHM hard. In the event the WHM gets away (runs away with sprint) front line jobs should return to fighting a DD until the WHM returns – and this is the key part, the reaction to WHM returning must be instantaneous. If the WHM can constantly walk in, curaga 3, sprint out, repeat, the game’s over. A quick provoke will stop any MP use and all three front line jobs should quickly (try to) dispatch the WHM asap. Same goes for when the WHM is killed, a quick reaction to his return is essential.

Killing the RDM) Prepared TP and abilities are important here, and using TP at once rather than trying to wait and skillchain. If we can’t pull it off with our first barrage of WSs, its better to stop and go back to attacking someone else. Obviously sometimes it’s necessary to stay on that RDM (like near the end of a game when his scoring would win them the game, and there’s nobody else with petra). It’s the mages’ jobs to keep that RDM from scoring while front line jobs build up TP again. Depending on the situation, it may be better to abandon the RDM kill entirely as getting it done may take too much time/leave an opening for other people to score.

In order to help communications during matches, I’ve compiled the names for rook positions that the JP players have adopted, along with a visual aid. Nobody is crazy enough to learn Japanese just for Ballista, but memorizing a few things could really help out.

I’ll ignore the 3 and 4 rook formations, as games don’t usually get that big, and there aren’t really any established names for those rooks.

Basic compass points:
北 きた （KITA） North (“Kita” has other meanings and can be used in ballista from time to time.  It can also mean “coming”, as in “they’re coming”.  Can be a little confusing.
南 みなみ （MINAMI） South
西 にし （NISHI）       West
東 ひがし （HIGASHI） East

Many of the rook names have some relation to other rook positions, so even memorizing one or two can help tremendously. 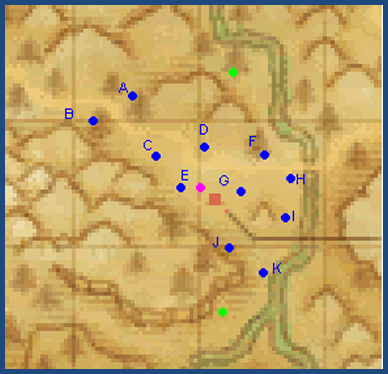 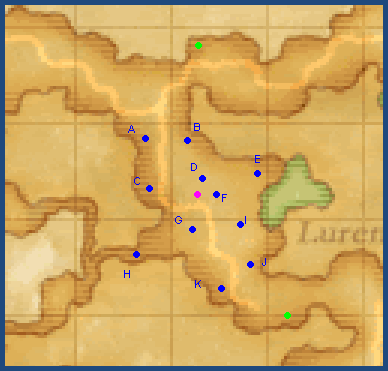 Japanese players will understand “camp” with or without the auto-translate.  However, things like “hole” and “bridge” would have to be in auto-translate for everyone to understand it.  Whenever the Japanese form of a compass directions (kita,minami,etc) appears in a name, you can use N S W E for the same effect.  Basically, the Japanese understand the English compass but may not use them during Ballista, as they’re already accustomed to their native tongue.